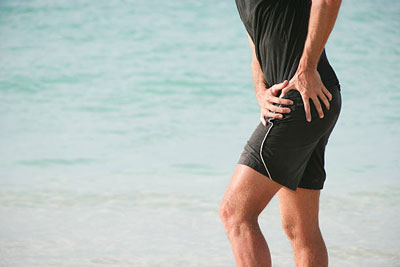 Lateral Hip pain that can run down the outside of the leg past the knee can occur due to a multitude of pathologies but it is collectively coined as Greater Trochanteric Pain Syndrome (GTPS). The incidence of GTPS is between 1.8 and 5.6 per 1000/year making it quite a common problem.  It is more common in women then men at a ratio of 4:1.

The Leap Trial which looked at the effects of three methods of treatment for GTPS was recently published in the British Medical Journal. Our clinical director Kim Snellgrove was involved in the Leap Trial as a treating physiotherapist when she worked for Alison Grimaldi in 2013/2014 and assisted with the education and exercise group.

The education and exercise group was educated in ways to avoid compressive load to the lateral gluteal tendons. Participants posture and functional activities were corrected.  Exercises involved progressive loading of the lateral gluteals commencing with a very gentle isometric program and progressing through a series of graded loaded exercises as the participant was able to tolerate the load. Reformers where also utilised in the later stage loading program in the Leap Trial.

If you are struggling with lateral hip pain at Bangalow Physiotherapy we can assist you using evidenced based rehabilitation and education.