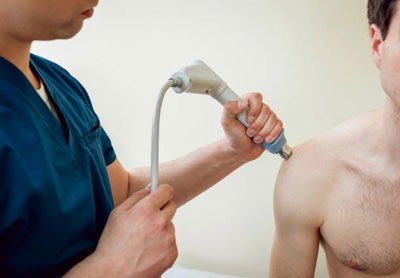 You may have heard of the new machine we have in our clinic and are wondering what it is. It is a Shockwave Machine. There are two types of Shockwave, there is radial shockwave (RSW) which we have and there is focused shock wave (FSW). Radial Shockwave is ballistically generated by compressed air. Radial Shockwave is a broad wave that can penetrate up to 5-6 cm in depth where as focused shockwave has a deeper penetration up to 12 cm. In physiotherapy radial shockwave is utilised to treat the more superficial tendons.

Shockwave is like a pressure wave and is sometimes termed an acoustic stimulator which creates biological effects.

The biological effects of shockwave are:

It has been found to be beneficial in the treatment of chronic: Cacchio et al utilised shockwave therapy on the chronic hamstring tendon of professional athletes and found 80% of the athletes in the shockwave group where able to return to sport after 9 weeks compared with 0% of the exercise alone group returning at 9 weeks.  A greater number of participants in the shockwave group, i.e. 85 percent also reported more that a 50% reduction in pain at 3 months compared with the exercise group where only 10 % reported a 50% reduction in pain.

Patellar tendinopathy has also positively responded to radial shockwave therapy when used in combination with an eccentric training program  (Van der Worp et al). Osgood-Schlatter Disease which is found in the adolescent and associated with growth spurts also effects the patella tendon. Shockwave has also been found to be of benefit with this condition (Lohrer et al).

In 2015 it was found that shockwave therapy helped reduce symptoms of Carpal Tunnel Syndrome when used in combination with night splints. There was significantly reduced pain and improved function versus the shame treatment with night splints (Wu et al).

Shockwave has also been found to be beneficial for lateral epicondylitis (tennis elbow). Lateral Epicondylitis symptoms are reported in the lateral elbow with grip and lifting. After just one treatment of shockwave at 6 months follow up grip strength and reports of pain where found to be significantly improved (Spacca et al).

Most studies recommend Shockwave as an adjunct to other physiotherapy treatments. It is generally expected that shockwave will be performed 1x per week for 3-7 treatments.